Beijing is the capital of the People’s Republic of China.  This city has frigid, dry, windy winters and hot, humid summers.  It is one of the most populated cities in the entire world.  Beijing is known for its fantastic temples, palaces, tombs, gardens, and parks.  The Forbidden City is a palace that was home to Qing and Ming Dynasty emperors.

It encompasses the biggest collection of antique wooden structures in the entire world.  A spectacular collection jade,  porcelain, ancient structures and riches are found in the Forbidden City.  Guests are able to take in the interesting and informative Palace Museum.  Temple of Heaven is a distinguished religious building that is often visited.  A trip to the Beijing Zoo is a fun excursion for the whole family.  This zoo is home to an array of less commonly seen animals and even a Chinese giant Panda.  A popular public park found in Beijing is named Fragrant Hills and renowned for its maple leaves.  The Fragrant Hill Red Leaves Festival is held in the middle of October every year.

For breathtaking Chinese gardening, don’t miss Beihai Park.  This landmark is one of the most massive  Chinese gardens and has a good amount of historically significant palaces, temples, and assemblies.   Jade Flower island is situated at the center of the park. Local recipes as well as a variety of other foods are served at the eating establishments in the vicinity.  A vacation in Beijing is an excellent selection and something to see for everyone.

I'm a professional tour guide as well as a real travelor . I know Chinese history and atrractions very well. I'd love to show you a classical China with traditional folks and history; and also I'd like to present you a modern China with varied city life.

Private Guide in Beijing - Annie Li aka "Any"

My name is Annie Li. I've been an experienced English speaking tour guide in Beijing for many years. My goal is to make your visit to Beijing and China fascinating, fun, and stress free! I can show you the many famous and awe inspiring landmarks, as well as the out of the way, non-tourist places!

I am Aurora,a private tour guide in China, I am 26 years old, and been a private guide already two years more. When you visit in Bejing and whole China, you will experience the magnificent ancient and modern of the most beautiful heaven: Great Wall, Forbidden city, Summer palace,Temple of Heaven.

I am a certified and professional private tour guide with 10 years experience. I am easy-going,passionate and patient young lady and am interested in providing service for your convenience. I am familiar with Beijing History and culture. I'm not fighting alone now, I have built up a wonderful team with talent guides, experienced drivers and great partners in Beijing, Xi'an, Shanghai, Datong, Guilin, Lijiang...

I am a national licensed tour guide, with rich experience both as national tour guide and local tour guide. I have organised many tourist groups across all China. I know very well where is the best resources of discount hotels and air tickets, how I can guide my clients to where they what to go, to what they want to see with their own eyes.

Hello, Welcome to Beijing. My name is Judy. I'm an experienced guide who speaks English and French living in Beijing. Being a fan of Chinese history as well as an easy-going and considerate person, I've made lots of friends and learnt plenty of stories from different countries all over the world through what my past 8 years' working.

I'm a software engineer. I've been working for a company that got foreigner developer for almost 2 years. English is my second language. I've been learning it for 18 years. And I made a big progress in the past two years. It's very nice to be a guide for a foreigner. It'll improve my skill and use it during work.

As a licensed International Tour Guide I have taken groups to Thailand and South Korea. I reside in Beijing and would love to share my knowledge of popular sites such as the Tiananmen Square, Forbidden City, and Great Wall etc. But, I am prepared to take you to places such as the old Hutong district, the market place, local restaurants, and help you to savor the current culture embedded in this ancient city! I will bring these historical monuments alive to you by framing it in the context of my knowledge of this remarkable country.

Annie Li aka "Any" Beijing, China

Annie was a wonderful guide. She was very knowledgeable and flexible with our schedule. She suggested several wonderful spots to tour/ see and was even able to arrange for us to be picked up by the driver we were familiar with to take us to the airport. She was very kind to our children and took us to several great authentic places to eat. We truly appreciated her kindness and knowledge, it made our time in Beijing much less stressful.

Hi Annie, I am a 25 year old Aussie guy. I have a day free next week and want to make the most of it! Looking for a tour guide all day so please let me know if you are available :) Cheers, Ben
Ben
Guide's answers
▼ Quick tours search
2 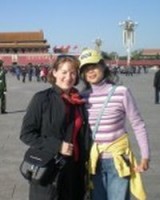