I'm are lover of nature, natural history, botany, I have been guiding for over 15 year, I ENJOY the outdoors of Dominica... I have been guiding group from all over the world, to discover Dominica's waterfalls, rivers, canyons, lakes, rainforest.. I enjoy share the local knowledge of my island..

Dominica is an island with the Caribbean Sea on the west and the Atlantic Ocean on the east, located between Guadeloupe and Martinique. Its lush, tropical climate creates the perfect climate for a profusion of rainforests that cover most of the island’s mountainous terrain. The abundance of greenery and other natural beauty garnered this island the nickname, “Nature Isle of the Caribbean.”

Dominica is certainly one of the most naturally beautiful places on earth. Hiking and horseback riding trails crisscross the rainforests, granting the most spectacular views of waterfalls and winding rivers, unusual and exotic plants and animals (like the rare Sisserou parrot), breathtaking volcanic mountain peaks and hot springs. In fact, the world’s second largest hot spring is found on Dominica: Boiling Lake in the Valley of Desolation. Rock climbing, zip-lining and ATV tours add to the list of exciting outdoor activities.  Dominica’s nature trails in places like Morne Trois Pitons National Park are one of many attractions for outdoor enthusiasts who visit the gorgeous island nation.

Dominica is also known for being one of the top ten dive destinations in the world, with an underwater seascape that is equal to the beauty of the island’s lush landscape. Coral reefs and tall stands of sponges submerged in crystal clear, calm waters are a pristine habitat for some of the most rare marine species, including seahorses, batfish, flying gurnards, frogfish, electric rays and thousands of species of vibrantly colored tropical fish. Underwater volcanoes have formed a dramatic landscape with craters, chasms and pinnacles with occasional “champagne” flutes of bubbling waters caused by geo-thermal vents, creating some of the best diving scenery in the world. Soufriere Scott’s Head Marine Reserve is a top diving and snorkeling spot in Dominican waters.

The island culture of Dominica is friendly and fun. The capital city, Roseau, hosts the World Creole Music Festival and also puts on a fantastic Carnival celebration, with great food and fabulous music.

I am Hector Medina - personal tour guide in Chile. I'm happy to help you plan your trip or simply drive and guide. I can offer you Santiago Tour, Wine Tour, Valparaiso Tour. Read more 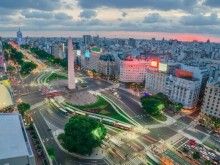