Kazakhstan is by far the largest of the states of Central Asia of the former USSR.
Cities : Astana (capital), Almaty, Aktobe, Ekibastusz, Kokshetau, Kostanai, Petropavlovsk, Karaganda, Semipalatinsk, Shymkent, Temirtau, Turkistan, Taraz
Best Places : Aksu-Zhabagly, Altai Mountains, Baikonur, Karkara Valley, Zaliyisky Alatau
Native Kazakhs, a mix of Turkic and Mongol nomadic tribes who migrated into the region in the 13th century, were rarely united as a single nation. The area was conquered by Russia in the 18th century and Kazakhstan became a Soviet Republic in 1936. During the 1950s and 1960s agricultural "Virgin Lands" program, Soviet citizens were encouraged to help cultivate Kazakhstan's northern pastures. This influx of immigrants (mostly Russians, but also some other deported nationalities) skewed the ethnic mixture and enabled non-Kazakhs to outnumber natives. Independence in 1991 caused many of these newcomers to emigrate. Current issues include: developing a cohesive national identity; expanding the development of the country's vast energy resources and exporting them to world markets; achieving a sustainable economic growth outside the oil, gas, and mining sectors; and strengthening relations with neighboring states and other foreign powers.

CLIMATE OF Kazakhstan: continental, cold winters and hot summers, arid and semiarid
RELIGION OF Kazakhstan: Muslim 47%, Russian Orthodox 44%, Protestant 2%, other 7%
POPULATION OF Kazakhstan: 15,143,704 (July 2004 est.)>>
ECONOMY OVERVIEW OF Kazakhstan: Kazakhstan, the largest of the former Soviet republics in territory, excluding Russia, possesses enormous fossil fuel reserves as well as plentiful supplies of other minerals and metals. It also is a large agricultural - livestock and grain - producer. Kazakhstan's industrial sector rests on the extraction and processing of these natural resources and also on a growing machine-building sector specializing in construction equipment, tractors, agricultural machinery, and some defense items. The breakup of the USSR in December 1991 and the collapse in demand for Kazakhstan's traditional heavy industry products resulted in a short-term contraction of the economy, with the steepest annual decline occurring in 1994. In 1995-97, the pace of the government program of economic reform and privatization quickened, resulting in a substantial shifting of assets into the private sector. Kazakhstan enjoyed double-digit growth in 2000-01 - and a solid 9.5% in 2002 - thanks largely to its booming energy sector, but also to economic reform, good harvests, and foreign investment. The opening of the Caspian Consortium pipeline in 2001, from western Kazakhstan's Tengiz oilfield to the Black Sea, substantially raised export capacity. The country has embarked upon an industrial policy designed to diversify the economy away from overdependence on the oil sector, by developing light industry. Additionally, the policy aims to reduce the influence of foreign investment and foreign personnel; the government has engaged in several disputes with foreign oil companies over the terms of production agreements, and tensions continue.

Besides hiking in Medeu and Chimbulak are there any other outdoor activities that a family with two teenage sons can enjoy? We know this is the trip of a lifetime so we want to be sure we are able to do all that we can as a family. We plan to go when the weather is great so wed like ...
Cami Wallice
Guide's answers
▼ Quick tours search
2 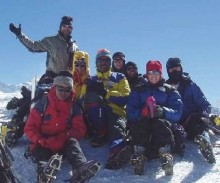